Choices behind the new designTõnuJan 06, 2011

Comments (2)
New Edicy has been live for a few weeks now. The reception has been really great. Actually we were worried as so substantial changes often result in a war with existing users.
But why the hell did we decide to change something that works at all? Why didn't we just release cool new features instead? Here's a brief look behind the curtains.

Edicy's layout has been great from the very beginning. It stays in the background, doesn't interfere with user and her site. It has a small footprint, most of the time it's just a thin ribbon at the bottom of the screen.

Two things were out of place though. For first, we didn't have a consistent navigation for fullscreen views. Many users got lost by not having "a map" of Edicy in their mind. Secondly, Edicy lacked unified look and feel, resulting sometimes in confusion for users.

We definitely haven't reached ideal state with either of these two, but the improvements are significant. Getting lost really requires an effort now. And everything is more polished, looks more unified.

Before Edicy looked like a tool from Web 2.0 design wave. Maybe a bit more subtle and elegant. It was nice and worked well. Actually it had gone through a couple of light redesign phases already. But it always stayed a bit generic, abstract for our eyes. It didn't have a distinct personality, it lacked character. 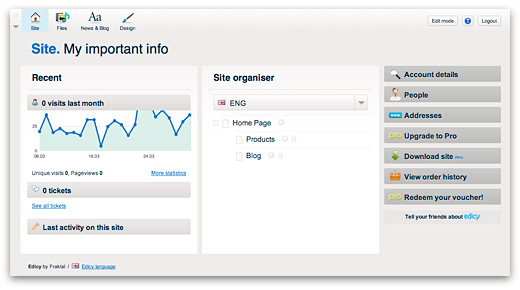 As design is our passion, this situation didn't motivate us enough to develop Edicy as much as we should have. So when browsers started to allow more sophisticated styling (called CSS3) lately, we decided to jump that train and be the trendmakers ourselves this time. 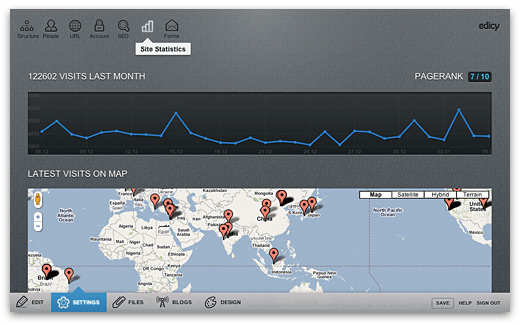 We aren't exactly free of following a zeitgeist this time eiteher. What you see in Edicy, is a kind of letterpress aesthetics—text is pressed into the background, backgrounds have subtle noise or paper patterns, icons are similar to text in form and colors. It's all the rage since iPhone went mainstream, but still not too common in web, especially in small business arena.
We've wandered a bit further than most and designed a business oriented web app in this style from ground up, not stopping for compromises.