Comments (2)
We’ve always worked hard to make Edicy the best website creation tool on the internet. Since we launched in 2008, we’ve added a huge number of new features and improvements.

Recently, we had a look at our pricing, and decided to make things a bit more flexible. From today (Oct 1, 2012) there will be two paid plans instead of one. Here's a quick overview: 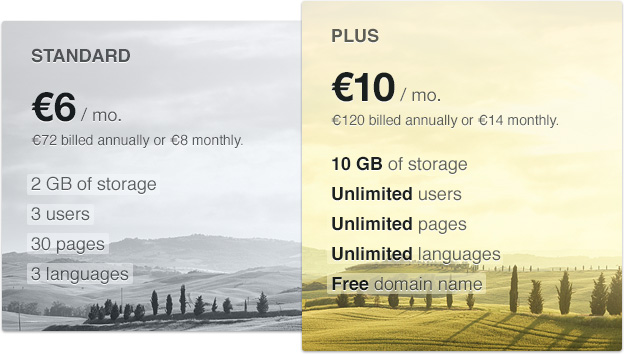 The main reason for this change is that we didn't have a more affordable offering so that small startups and NGOs had to pay for resources they didn't need. Many of them ended up not building a site at all, some abandoned unique domain names and some just bit the bullet and paid for Edicy Pro anyway. Having Edicy standard on board makes the entrance barrier significantly lower — yearly fee is 25% smaller than before.
The new Edicy Plus plan is otherwise the same as Edicy Pro, except it now sports twice the amount of storage and has smaller discounts for prepayments.

Previously with Pro you were billed €14 monthly or €96 annually. Current Pro subscriptions will last until the end of the prepaid period. Pro will be available for extension until October 31, 2012. After that, it will be wound up, and Pro subscribers will be able to upgrade to Plus or downgrade to Standard.
Second reason for this move is that we decided to position ourselves more on the paid service territory than before. So far we've been classical freemium. From now on, our focus is on the paid service. Our free offering will remain available too, don't worry. We have to limit some of its resources though. From today, free accounts will be restricted to a single user, 2 languages and 5 pages. If you’re already using more than this, we won’t take them away! However, after October 1st you won’t be able to expand any further unless you sign up to one of the paid plans.
See Edicy plans and pricing